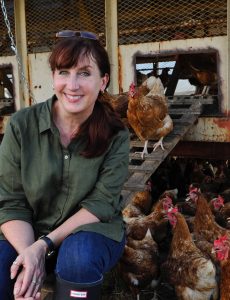 It wasn’t so long ago that a minor scratch could develop into a life-threatening infection. That began changing in 1928 with the discovery of penicillin. The decades that followed saw rapid expansion of the antibiotic arsenal, revolutionizing modern medicine. Hailed as miracle drugs, antibiotics quickly found their way into consumer products like creams and cosmetics, and into our food systems, where they boosted yields of farm animals—chickens most of all.

By the end of the last century, discovery of new antibiotics was waning, and a more sinister threat emerged: Resistance. Bacteria’s genetic versatility and short life cycle led to strains that were unaffected by previously potent drugs. Egged on by excessive physician prescriptions and poor patient compliance, resistant strains began spreading through human populations. But the most significant driver of antibiotic resistance may be the wholesale use of antibiotics in our food systems, leading to resistant bacterial strains in farm animals—resistant strains that find their way into humans.

Early adopters of antibiotics believed them to be as benign as they were miraculous, and their use in large-scale meat production operations resulted in ever-greater yields and profits. By the time antibiotics darker side became apparent, entrenched economic interests resisted and denied the adverse findings, borrowing a page from the playbook of the tobacco and fossil fuel industries. In fact, the parallels with climate change are striking—a creeping crisis with deep antecedents, entrenched economic interests, and no quick fixes. And the stakes are high: nearly a million people are expected to die this year from antibiotic resistant bacteria—a toll that’s expected to increase tenfold by mid-century.

Award-winning investigative science journalist, Maryn McKenna, has taken a deep dive into the antibiotic crisis, and her findings are as chilling as they are illuminating. Her 2017 bestseller, Big Chicken: The Incredible Story of How Antibiotics Created Modern Agriculture and Changed the Way the World Eats, traces chicken’s meteoric rise from scarce treat to ubiquitous global commodity, and reveals the astounding role antibiotics have played in industrial farming. The “wonder drugs” that revolutionized medicine also revolutionized the way the world eats—and not necessarily for the better. Rich with scientific, historical, and cultural insights, her spellbinding presentation shines a light on one of the world’s favorite foods—and shows us the way to safer, healthier eating for ourselves and our children

McKenna is a columnist for Wired, a Senior Fellow at the Center for the Study of Human Health at Emory University, and writes for The New York Times Magazine, National Geographic, Mother Jones, Newsweek, NPR, Smithsonian, Scientific American, Slate, The Atlantic, Nature, and The Guardian, among other publications. Her 2015 TED Talk, “What do we do when antibiotics don’t work any more?” has been viewed more than 1.6 million times and translated into 33 languages.