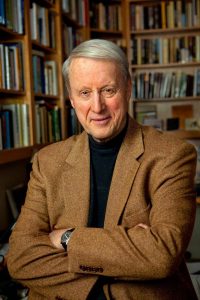 Come see Hedrick Smith take on some of the most vexing political issues of our times: economic inequality, dark money, voter rights, campaign financing and more.

Over the course of his long and distinguished career as an award-winning journalist and bestselling author, Smith covered the stories that have defined our times—from the civil rights movement, Vietnam, the Cold War and the fall of the Soviet Union, to recent developments in terrorism, healthcare, education, and the environment.

Starting in 1962 as reporter for the New York Times, Smith went on to serve as the Times Washington bureau chief, Moscow bureau chief, and other postings. Later as a producer for PBS, his credits include 26 primetime specials and mini-series. He is the author of numerous books, including Who Stole the American Dream? Awards include Pulitzers for his work on the Pentagon Papers and for stories on Russia and Eastern Europe, and Emmys for his PBS Frontline and other productions.

Smith first came to the i³ stage In February of 2017, where he held a sold-out audience rapt as he took on, “What Caused the Political Earthquake of 2016?” So much has come to pass since! You won’t want to miss this confident, authoritative and charismatic presenter as he shares his observations and conclusions about how to fix the broken U.S. political system.